This robot, controlled by software from a San Francisco–based company called Osaro, is smarter than any you’ve seen before. The software has taught it to pick and place chicken in about five seconds. Within the year, Osaro expects its robots to find work in a Japanese food factory. 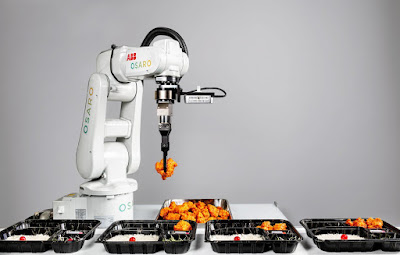 Industrial robots have been largely untouched by the latest advances in artificial intelligence. Over the last five or so years, AI software has become adept at identifying images, winning board games, and responding to a person’s voice with virtually no human intervention. It can even teach itself new abilities, given enough time to practice. All this while AI’s hardware cousins, robots, struggle to open a door or pick up an apple.

That is about to change. The AI software that controls Osaro’s robot lets it identify the objects in front of it, study how they behave when poked, pushed, and grasped, and then decide how to handle them. Like other AI algorithms, it learns from experience. Using an off-the-shelf camera combined with machine-learning software on a powerful computer nearby, it figures out how to grasp things effectively. With enough trial and error, the arm can learn how to grasp just about anything it might come across.

Quiz:
1. In your opinion, does the field of new AI-enabled robots follow the process generally described as Hype Cycle? Explain briefly.
1a. If yes, what is the current stage of the technology relative to the cycle?
1b. If no, how do you explain major disadvantages of using the technology relative to more traditional robots?
1c. How many years would it take for AI-enabled robots to become mainstream?

2. Where would you place the technology on the S-curve and Adopter Distribution chart as of today? Explain briefly.

Posted by Unknown at 1:39 PM No comments: Links to this post