XKCD describes a typical process for getting money for your business idea. For the sake of simplicity, filing patents, suing, and winning in court is replaced with filling out a simple form on Step 3 ;)

tags:
Posted by Unknown at 7:16 PM No comments: Links to this post

With the latest Wikileaks dump, the US government ran into the same loss of privacy problem people experience every day: how to share information without surrendering control.


The biggest difficulty the government faces in this realm is how to share information among people who need it to do their jobs without surrendering control of it once they start using it. The fact that Bradley Manning got access to and removed so many documents has many asking just what type of security was employed. The fact is that the security measures were extensive and the failure was not in a lack of attention to detail. There simply is no solution that adequately addresses control of information while allowing those who need it to use it.
tags:control, information, system, security, social, network
Posted by Unknown at 7:35 PM No comments: Links to this post

Seals diving for their dinner near Antarctica have surfaced with an extra morsel: information, gathered by electronic tags on the animals’ heads, about the shape of the seafloor there.

The work has revealed previously unknown undersea channels, through which warm water might flow toward fragile ice shelves. And the seals do it all for a fraction of the cost of traditional seafloor mapping done from ships.

Brain–training puzzles are useless for improving creativity (surprise! surprise!) But you can still shock your brain into becoming a better mathematician.


Earlier this year, a large-scale study of ‘brain training’ games debunked the idea that they can improve general cognitive abilities in healthy young people.

Meanwhile, researchers at the University of Oxford, UK and University College London have shown that maths skills can be improved by stimulating the brain with electricity, perhaps removing the need for brain training games altogether.

A weak current was applied to participants’ parietal lobes – an area of the brain involved in numerical understanding – for 20 minutes before they began learning the associations between a series of nine arbitrary symbols to which the researchers had secretly assigned numerical values. A control group thought they were receiving the same electrical treatment, but were not.

Subjects who received the electrical treatment showed an enhanced ability to grasp the relationships between the symbols compared with the control group. Remarkably, the improvements were still seen six months after completing the training.
tags: creativity, education, information, brain, control
Posted by Unknown at 9:34 PM No comments: Links to this post

Germany: the brightest country in the solar system 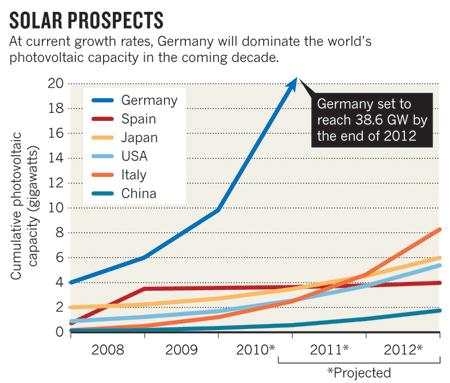 What wisdom of crowds?


He always looked at things from the perspective of what was the user’s experience going to be? But unlike a lot of people in product marketing in those days, who would go out and do consumer testing, asking people, “What did they want?” Steve didn’t believe in that.

He said, “How can I possibly ask somebody what a graphics-based computer ought to be when they have no idea what a graphic based computer is? No one has ever seen one before.” He believed that showing someone a calculator, for example, would not give them any indication as to where the computer was going to go because it was just too big a leap.
Reminds me of what Henry Ford said about his potential customers, "If I had asked people what they wanted, they would have said faster horses."

In general, when people talk about The Wisdom of Crowds they forget that the concept applies to situations when users had had a lot of experience interacting with an object or system in question, therefore they can share their collective wisdom.

The second question is more fundamental: How much math do you really need in everyday life? Ask yourself that -- and also the next 10 people you meet, say, your plumber, your lawyer, your grocer, your mechanic, your physician or even a math teacher.

Unlike literature, history, politics and music, math has little relevance to everyday life. That courses such as "Quantitative Reasoning" improve critical thinking is an unsubstantiated myth. All the mathematics one needs in real life can be learned in early years without much fuss. Most adults have no contact with math at work, nor do they curl up with an algebra book for relaxation.


How much math do we really need? By G.V. Ramanathan. Washington Post. Saturday, October 23, 2010

I think we do need some math. It is the third best substitute for real-life problem-solving exercises. Physics is the second, but to do physics you need to know math, otherwise you'll end up waving hands for an hour, trying to understand or explain how the world works, when 30 seconds and a simple formula would suffice.

tags: education, problem, solution.
Posted by Unknown at 10:44 PM No comments: Links to this post

The latest numbers on mobile software are in:


Google's Android platform was running on 43.6 percent of all the smartphones purchased in the United States in the third quarter. It was followed by Apple's iOS, which captured 26.2 percent market share, and Research In Motion's OS, which tallied 24.2 percent share. Microsoft's mobile OS held 3 percent market share in the quarter.