In recent months, the Alphabet Inc. unit put a DeepMind AI system to reduce power consumption by manipulating computer servers and related equipment like cooling systems. It uses a similar technique to DeepMind software that taught itself to play Atari video games, Hassabis said in an interview at a recent AI conference in New York.

The system cut power usage in the data centers by several percentage points, "which is a huge saving in terms of cost but, also, great for the environment," he said.

The savings translate into a 15 percent improvement in power usage efficiency, or PUE, Google said in a statement. PUE measures how much electricity Google uses for its computers, versus the supporting infrastructure like cooling systems. 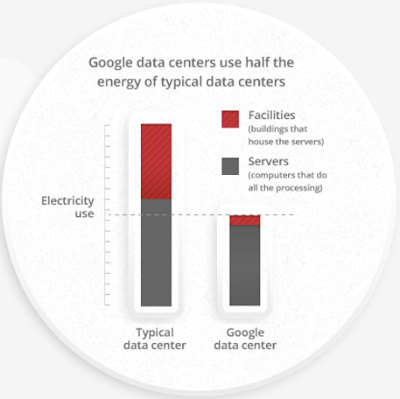 Question 1. Using the system model, name the functional element that DeepMind technology helps to improve directly.
Question 2. Based on what you know about the improved element, describe other functional elements within the same system.

A new way to map brains

(MIT Tech Review) Researcher Matthew Glasser says that unlike many previous studies, this map considers several features of the brain simultaneously to mark its boundaries. Some neuroscientists still define brain regions based on a historical map called Brodmann’s areas that was published in 1909. That map divided each half of the brain into 52 regions. Each hemisphere on the new map has 180 regions.

Glasser defined these regions by looking for places where multiple traits—such as the thickness of the cortex, its function, or its connectivity to other regions—were changing together. After drawing the map onto one set of brains, the researchers developed an algorithm to recognize the regions in a new set of brains where the size and boundaries vary from person to person. “It’s not just a map that people can make reference to,” Glasser says. “You can actually find the areas in the individuals that somebody is studying.”

From an innovation perspective, mapping methods create opportunities to systematically explore and coordinate knowledge about a broad class of objects. This particular approach enables scientists and engineers to move back and forth from generalized information about human brain to specific aspects in a particular brain. For example, we might be able to understand why 3D VR can replace painkillers in some medical applications.


Consumption habits have become increasingly fragmented, with more people watching programming, including television shows and live sports, on different online platforms. As a result, traditional television, with its 30-second commercials, is losing its commanding share of advertising dollars. Digital media is expected to pass TV as the biggest advertising category in the United States this year, with roughly $68 billion in ad sales compared with $66 billion for TV, according to the Interpublic Group’s Magna Global.

With online ad spending growing, finding ways to stand out among the onslaught of other online ads has become more important for advertisers. And therein lies a possible conundrum: Advertisers want their ads to look less like ads even as they are fighting harder for attention. 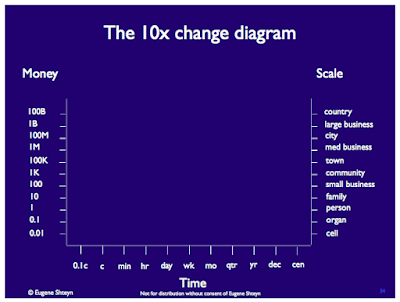 Question 1.
Based on our brief class discussion (see slide 33 Lecture Notes from July 11, 2016) and an earlier post on this blog, use the 10X Change diagram to map ad-related business models mentioned in class. Briefly explain parameters for each model.
(a ppt version of the 10X Change diagram is available for download here).

Question 3 (bonus). Use the 10X Change diagram to map potential ad-related business models that are now available with augmented reality games like Nintendo Go. What technologies (existing or new) can further improve such models?