Despite iPhone's success among consumers, enterprise mobile space is still wide open. This is where Google and HP, with its recent Palm acquisition, would like to step in. And, as we learned from the internet browser wars, nothing beats free:


Adobe and Google want to encourage Adobe employees to spend as much time using Android and the Flash Player 10.1 as possible.

Google gives away Android phones like they are party favors: it's planning to give every Google I/O attendee their choice of a Motorola Droid or Nexus One, and it gave away Nexus Ones to an audience of CIOs earlier this month at an event for Google Apps.
tags: mobile, tool, business, model, information, synthesis, problem, solution, bandwagon
Posted by Unknown at 4:30 PM No comments: Links to this post

The world wide web, as invented by Tim Berners-Lee in the 80s, is now dead. Graphics and video have become the primary applications for consumer internet. Here's how Intel addressing and advances this trend in its next generation Sandy Bridge processor architecture:

We have to remember that processing is only a part of the networked media equation. For the system to work, we need lots of bandwidth and server-side performance.

A good synopsis and a list of books/texts for technology entrepreneurs, as recommended by Professor Tom Byers:


1. Technology Ventures: From Idea to Enterprise, by R.Dorf and T.Byers.
2. Built to Last, and Good to Great by Collins et al.
3. Hot, Flat, and Crowded, by T.L. Friedman.
4. Customer Development, by Steve Blank.
5. How to Write a Great Business Plan article in Harvard Business Review, by Sahlman.
6. The Art of the Start, by G.Kawasaki.
7. Raising Venture Capital for the Serious Entrepreneur, by Berkery.
8. The No A**hole Rule, by Robert Sutton.
9. Smartest Guys in the World, by McLean and McLean.
I'd be particularly interested in ## 4 and 8.


A new technology early in clinical trials could make it possible for doctors to use specialized 3D printers to fabricate new human tissue based on a patient's own cells. 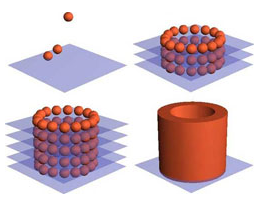 When people see this type of devices they often think about artificial organs that can be produced to replace failed ones. But what about totally new organs or new ways to extend human abilities? For example, a third eye that can see in the dark, smell implants, novel taste buds, blood vessels that feed certain brain areas, so we don't get tired while doing demanding mental tasks. Once the technology is sufficiently developed and tested, the impact on the society could as big as gene engineering.

Prisoner's Dilemma is a descriptive title for a strategy problem in game theory. It got its name from a hypothetical situation when two prisoners who stand accused of committing a major crime, e.g. an armed robbery, are interrogated separately by the police. The police have arrested them on a smaller charge and currently doesn't have any direct evidence that connects the prisoners to the armed robbery. If both prisoners stay silent they will receive a short sentence of several months in jail. If both of them confess they get 5 years in prison each. If one of them confesses, but the other stays silent, the first one goes free, while the second gets a 10 year sentence. It's a famous example - you can read an extensive description of how it works in Wikipedia and other sources.

Obviously, it would be better for the prisoners if both of them stayed silent and as the result got the lighter sentence. But game theory analysis shows that the most likely outcome of the game is when both of them confess and each gets 5 years in prison. The key to understanding this craziness is to appreciate the fact that the prisoners cannot communicate with each other and they don't trust each other. As a consequence, they choose to confess and get 5 years, rather than stay silent and have the other guy confess, which would cause him go free and you'd get 10 years in prison.

Now, let's turn to consider the world of mobile communications. It seems to me that Apple and Google are playing Prisoner's Dilemma in this space. Had they decided to cooperate in making iPhone a dominant destination device for media and cloud services, both companies would have benefited enormously: Apple on the hardware and media side; Google on the search and cloud computing side. But, Google seemes to choose the "confess" position. That is, rather than building apps and services exclusively for iPhone/iPad/iWhatever, they make an extensive effort to develop software and services for competing hardware. As a result, we can observe how Apple and Google are increasingly becoming marketplace adversaries. For example, recently Apple announced iAd, its own ad platform, which threatens Google's ad business on iPhone.

This situation stands in marked contrast with the 30-year old Intel-Microsoft relationship that made both companies dominant in their respective hardware and software PC business domains. Comparing the situations, I can't help but conclude that there's a lot more trust and communication between PC industry leaders than between Apple and Google.

On dog walks I usually listen to UC Berkeley podcasts. Today, it is Cognitive Neuroscience course taught by Prof. Richard Ivry. In one of the lectures he talks about the difference in how we perceive live vs non-live objects. When asked to describe a live object people are most likely to mention its properties or attributes. For example, they would say that cat is soft, black, friendly, etc. But  describing a non-live object, they would focus on its function. For example, hammer is good for pounding nails, car for driving, and etc.

Armed with this knowledge, let's turn our attention to how Apple markets its products. For example, Steve Jobs describes iPad as wonderful, magical, beautiful, amazing device.

Apple's Mac vs PC ad campaign also focuses on Mac as a person, rather than device. What is being sold is a fashion item; when consumer buys it s/he adds personality first and functionality second. And here's the line-up of Apple's portable products:

As we can see, iPad fills nicely into the niche between iPhone and MacBook. Now, everybody who wants to make a computer fashion statement can do it at will.

In the meantime, let's take a break and watch South Park episode "You've got 0 friends".
Posted by Unknown at 10:23 PM No comments: Links to this post

Trade-off of the day: Commitment vs Costs

Commitment to a service is a good deal for the service provider, but bad for consumers:


...prepaid customers [month-to-month vs 1-yr+ contract] generate less revenue per month than post-paid customers. They are more likely to switch back and forth between service providers. And they typically use more network resources, averaging around 2,000 voice minutes per month compared to about 1,000 minutes per month, than post-paid customers, according to Craig Moffett, a Sanford Bernstein equities analyst.
Commitment to a regular long-term service reduces the hassle of looking for the best deal and setting up a new account. And you end up paying for the convenience through over-priced plans.

A healthcare system for trucks

Large fleet operators, such as UPS, Hertz, FedEx, and others, perform regular scheduled maintenance on their vehicles. UPS has moved one step further and introduced a "lifestyle-depended" maintenance system, which takes into account real-time and historical diagnostics data. The data is gathered by a "dumb" telemetry device embedded into each truck, then transmitted, stored, and compared to similar information captured from other trucks. As a result, the company is able to save millions of dollars by discovering and changing patterns of behavior of truck drivers, mechanics, and suppliers. 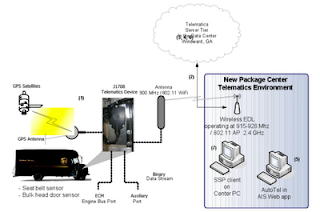 For the sake of comparison, UPS runs a population of tens of thousands of trucks. This is the size of a small town in the US. And we don't have anything even close to such lifestyle-oriented healtcare system for humans. Trucks' health is better managed than people's.

The market for 3D content continues to grow. Bloomberg reports that a US factory making 3D cinema equipment is working around the clock.

There are about 2,000 digital screens in China, including 800 that are equipped to show movies in 3-D, Li said in an interview. Even small cities in China are installing 3-D equipment, he said.

In addition to that, in September 2010 Sharp will introduce small 3D displays that don't require special glasses. The company bets that eventually all portable devices will be 3D-capable.

As a result of this expansion, demand for 3D content will increase dramatically, which in turn will put pressure on storage and bandwidth. From a system analysis point of view, we are witnessing a change in payload packaging (from 2D/analog to 3D/digital) - a clear sign that the whole system, including production (source), control, and distribution infrastructure, will have to change.

Toward a personal brand

Just wanted to capture a thought that today's social networking infrastructure provides
1. a platform for personal branding based on reputation;
2. a marketplace for digital goods.

Therefore, we should expect emergence of completely new kinds of commerce, including money, development tools, transaction mechanisms, and etc.