Last week, Business Week published an article by former CEO of Intel, Andy Grove, where he, among other things, pointed out that now it takes tons and tons of money to create jobs in America. The chart below shows that in 2010 dollars high-tech job creation costs went from about $2K in the 1950s to $100K in the 2000s. 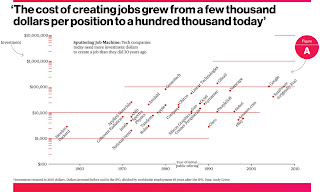 Andy Grove thought it was a gruesome trend that spelled doom for American workers. He said that unless we learned how to create jobs more efficiently, the gap between the haves and have-nots is going to grow. Pretty bad, isn't it.


"President Barack Obama, under pressure to spur job growth, said on Saturday two solar energy companies will get nearly $2 billion in U.S. loan guarantees to create as many as 5,000 green jobs."
It's $400K per job! Four times greater than the current already absurdly high level. This looks like the disruption pattern described in The Innovator's Dilemma, by Clayton Christensen. That is, we keep "producing" more and more expensive jobs (products/services), while our growth model is being disrupted by China and other formerly 3rd world countries.