Invention of the Day: "next to the telephone, the most useful communication device"

Before the radio, heliograph was the first wireless communications device


(from Wikipedia) that [sent] signals using Morse code flashes of sunlight reflected by a mirror. The flashes are produced by momentarily pivoting the mirror, or by interrupting the beam with a shutter.

The first recorded use of a heliograph was in 405 BC, when the Ancient Greeks used polished shields to signal in battle. The simple and effective instrument that Mance invented was to be an important part of military communications for over 60 years. Although limited to use in sunlight, the heliograph was the most powerful visual signalling device known. In pre-radio days it was often the only means of communication that could span ranges of up to 100 miles with a lightweight portable instrument. 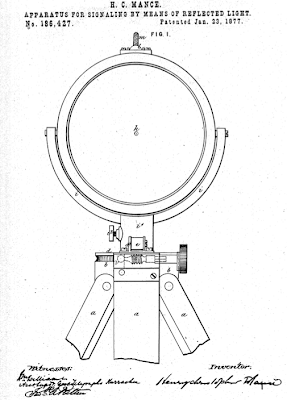 In 1909, the use of the heliograph for forestry protection was introduced in the United States. By 1920 such use was widespread in the US and beginning in Canada, and the heliograph was regarded as "next to the telephone, the most useful communication device that is at present available for forest-protection services"
To think of it, today's fiber-optics switches use the same principles as the heliograph from 2500 years ago. Note, how Morse code migrated from telegraph, to heliograph, to radio.