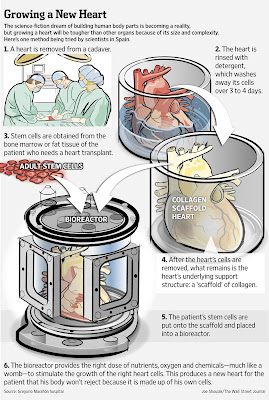 The March 22 issue of the WSJ reports that biologists have found a working solution to the problem of creating "spare" body parts for transplantation. Before diving into the solution, let's consider the core problem first.

Traditionally, doctors took organs from healthy donors (live or recently dead) and used them to replace failed organs in their patients. The method had (and still has) two major problems: 1) high-quality body organs are rare and expensive; 2) other people's organs can be rejected by the patient's immune system.
Although creating biological organs from scratch from the patient's own cells can address both aspects of the problem, such method would be extremely difficult and take a long time. Besides, the vast majority of people don't require transplants during their lives. Therefore, growing organs that nobody needs would be a tremendous waste.

The new solution allows to create one's "own" organs on demand. It uses sanitized cadaver organs as a scaffold that supports the patient's own stem cells that grow around it. (The figure above shows steps involved in building a heart.) As the result, we have an abundant supply of cheap "prototype" organs that in combination with the patient's stem cells have a great chance to be compatible with the host body. The method would probably work for most functional body parts, except the brain.