Why Silicon Valley would be impossible in Europe.

Startup workaholic lifestyle is incompatible with European cultural values that emphasize the balance between work and personal time. Societies in Europe fought long and hard for an 8-hour workday, 40-hour workweek, overtime pay, 4-week paid vacations, and other labor benefits. In many developed European countries laws tax not only high incomes, but also high-intensity effort. For example, in sharp contrast with the US, overtime pay laws apply to engineers, not only "regular" workers. For a startup strapped for cash, paying its developers overtime premium, as required by law, would be a financial disaster. 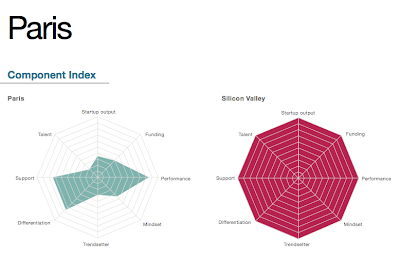 The modern factory was invented in England in the 18th century. This method of production dominated the Industrial age. Laws and culture tied to this model helped create European and American economic successes. As it always happens, the recipe for success eventually turned into a recipe for disaster. Unfortunately for Europe, many developed countries did not adjust in time for the new type innovation: startup-based, hightech, 24/7 effort. As a result, in the foreseeable future we'll not see a big change in Europe, despite their governments' programs for stimulating Silicon Valley-style innovation.

P.S. Michel Foucault , a French social theorist, understood this issue the best. He called it Biopower. His books are very difficult to read, but they are worth your intellectual effort.
Posted by Unknown at 8:53 AM