On November 14, 2016, the New York Times wrote a story about a Spark Capital, a 11-year old technology venture firm. 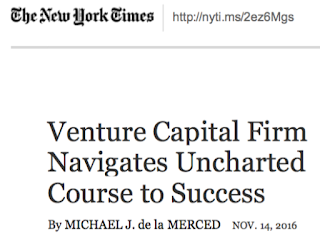 The article opened with a description of one of Spark's recent deals:


Betting on an automated driving start-up in 2015 may not have been the most intuitive gamble at a time when Google and Uber had already declared that self-driving vehicles were among their top research priorities.

But in the fall of 2015, Spark Capital was one of a few established venture capital firms to wade into the industry, helping lead a $12.5 million investment in Cruise Automation, a start-up based in San Francisco whose software helps cars pilot themselves. One of Spark’s partners became the only outside board member of the firm.

It was a bet that paid off quickly: Within six months, Cruise sold itself to General Motors for about $1 billion.


Questions:
1. In your opinion, why the timing of the deal turned out to be so good? Was it pure luck? If you were the analyst who "discovered" Cruise Automation back in 2015, how would you justify the $12.5M investment to your VC partners?
2. (optional) Consider the generic innovation diffusion S-curve, as described in Everett Rogers' "Diffusion of Innovations." What stage of the curve the self-driving car technology is now? Why?