Until the middle of the 20th century, creativity was generally considered as a psychological attribute of an artist and, sometimes, of a scientist. Then in the late 1950s, J.P. Gulliford applied the idea of creative thinking to technological inventions. 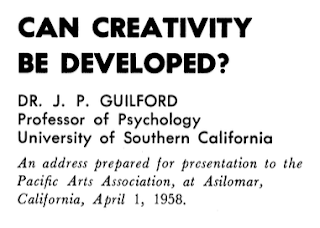 Nowadays, engineers and scientists are expected to be creative. A recent paper shows how creativity in science/tech and art relate to personality traits, the so-called Big Five:


The Big Five personality dimension Openness/Intellect is the trait most closely associated with creativity and creative achievement.

A related paper outlined the overall relationship between the Big Five, by grouping them into two complementary categories - Stability and Plasticity.

Remarkably, the brain uses a broad range of cognitive strategies to pursue goals within a social context. Given a chance, we can exercise our creative options through technological innovation.

As a side remark, from an innovation theory perspective, the brain and society solve the stability-plasticity dilemma by using both traits, e.g. through the separation in space and time.
Posted by Unknown at 11:44 AM