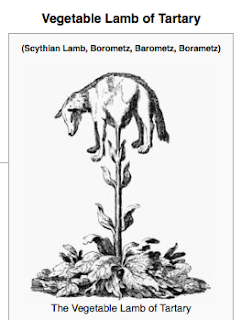 In the Middle Ages cotton was cultivated in Asia and shipped to Europe either as raw fiber or cloth. Through their contacts with Asian traders, Europeans learned that cotton originated as a plant, but the only source of fiber they knew was sheep. That is, sheep produced wool, which was a major European, mostly English, trade good at the time. Putting two and two together, a) cotton is a plant; b) fiber grows on sheep, people came up with Vegetable Lamb of Tartary, a plant with sheep fruits.

By today's standards, this creature would represent a marvel of genetic engineering.

Subsequent to the BURIAL IN WOOL ACTS 1667 and 1678 all bodies were to be buried in wool only, unless they have died from the Plague and an affidavit sworn accordingly. The penalty for not doing so was £5. These were repealed in 1814.

It was decreed that:

"No corps should be buried in anything other than what is made of sheep's wool only; or put into any coffin lined or faced with any material but sheep's wool, on pain of forfeiture of £5."

So, here we have a new imagined animal created by a simple combination of two common very important natural objects: plant and animal. Their regular sizes and functions do not change: plant produces fruit (sheep), the sheep produces cotton.
Nowadays, we got a lot more sophisticated imagination. For example, in Avatar they have the Na'vi people, who look like a combination of a cat and a human. But to make the new creature appear more fantastic, designers doubled her size, made her skin blue, and added the ability to connect her nervous system to local plants and animals. Why? Probably, because network looms large in our lives today, just the way wool loomed large in medieval England.