A 2008 Harvard Business Review article by Noam Wasserman describes a difficult choice that a start-up founder faces when his company begins to grow rapidly:

As start-ups grow, entrepreneurs face a dilemma — one that many aren’t aware of, initially. On the one hand, they have to raise resources in order to capitalize on the opportunities before them. If they choose the right investors, their financial gains will soar. My research shows that a founder who gives up more equity to attract cofounders, non-founding hires, and investors builds a more valuable company than one who parts with less equity. The founder ends up with a more valuable slice, too. On the other hand, in order to attract investors and executives, entrepreneurs have to give up control over most decision making. 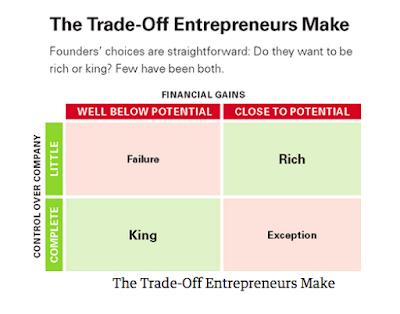 This fundamental tension yields “rich” versus “king” trade-offs. The “rich” options enable the company to become more valuable but sideline the founder by taking away the CEO position and control over major decisions. The “king” choices allow the founder to retain control of decision making by staying CEO and maintaining control over the board—but often only by building a less valuable company.


-------------------------
Since the publication of the artcile, a number of successful technology companies, including Google, Facebook, Twitter, and Uber, managed to break, rather than make the trade-off. That is, the founders have retained a large degree of control while building highly valuable companies.

Question 1: What's common between these companies with regard to the relationship between control and funding? Describe the existing or propose a new breakthrough solution to the founder's trade-off.

Question 1: I think the trade-off for every entrepreneur is not being flexible enough to make their original idea evolve.

I think this companies evolved their ideas to produce the revenue that the board needs. If the board is happy there is no reason to take away the control of the company. I think they had been very effective to balance the delivery of the original product without compromise their original ideas and still delivering the expected revenue.

1.- Apple
firing Steve Jobs made a huge damage to Apple. The company was losing a lot of market and money, because the original idea of what the company was supposed to be, was completely lost. The only solution that apple found a years later was hired Jobs again to save the company from the bankrupt.

After reviewing the mentioned companies; Google, Facebook Twitter, Uber I noted the management style, vision and culture of these founders was integral to the future value of the businesses. In the simplest terms, VC managers were unable to improve on the leadership and management (founders) that already existed.

I used the trade off analysis we discussed in the class for video streaming trade-off.
X- axis is "Rich" and Y-axis is "King". Now the ideal solution is to reach an optimal point where the founder have 50% control on the company and they can get investment worth of other 50% shares. But this is not win-win situation for the founder as it might seem to be, because they won't be able to generate huge investments and hence even if they have good amount of control, its of no major value as the company will remain a small/medium sized one.

Now we have to think of the third axis, where we can split the shares into different categories of money and control.
Earlier every share had the same voting rights, so the less shares founders had, less control they had.
But if we have a class of "super-shares" that has more voting rights than the "normal" shares, then even if founders have less volume of these shares, they will still have major control, voting right and decision making of the company.

Founders keep most of the Class B share and hence even today they have major control over the company (more than 50% if I am right).
The following articles explain Google Share Class and their distribution in detail.
http://dealbook.nytimes.com/2012/04/13/new-share-class-gives-google-founders-tighter-control/
http://www.businessinsider.com/googles-co-founders-are-going-to-sell-44-billion-worth-of-shares-2015-2

But, a point to note is, founders should have proved their mettle with investors to negotiate such share structures in the company.