Is Apple in long-term trouble?

A survey of software developers shows a sharp drop in Objective-C popularity, Objective-C being the main programming language for Apple's iOS. 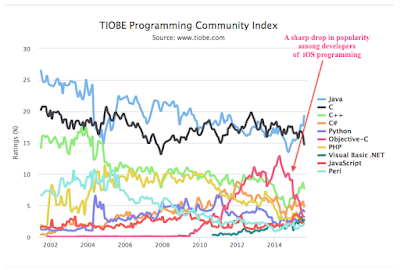 Fewer developers means fewer apps for consumers and businesses. One could argue that with hundreds of thousands of apps already available in the AppStore Apple should not worry about the trend. Furthermore, Apple's move into its own services, including media streaming, may also decrease the need for independent developers. In general, the mobile apps space has matured well beyond its heydays.

Nevertheless, it's hard to imagine a popular software development platform that is of limited interest to developers. We might be seeing the beginning of the end of Apple's rapid expansion.