(MIT Tech Review. Feb 1, 2013) Currently, researchers have limited tools to study the molecular structure of proteins. X-ray diffraction can give them an atomic-level view of some proteins, but many copies of the protein must be crystallized into a rigid lattice, a process that does not work for all proteins and results in an averaging of protein shape. Conventional MRI, which can be used by doctors to peek inside the body, doesn’t let researchers see anything smaller than a few micrometers in size because the detectors aren’t sensitive enough to pick up magnetic field signals from very small structures.

Two reports published online in Science on Thursday open up the possibility that researchers may be able to determine the structure of individual proteins in living cells. ...the researchers show how specially modified diamond flakes can be used as nanoscale magnetic field detectors.
These tiny sensors can elucidate the structure of single organic molecules. With nanoscale MRI, researchers may one day be able to directly image proteins and other molecules at the atomic scale. 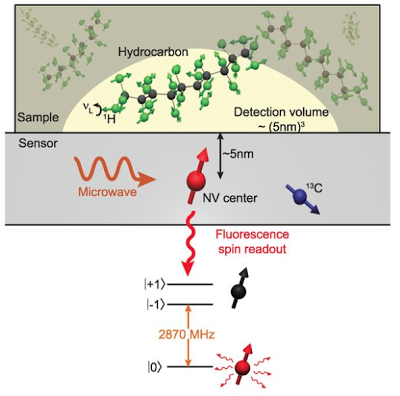 It would be amazing to trace individual proteins in live cells. For example, we could see how specific medicines work in real time, or how DNA decoding results in signalling, etc.