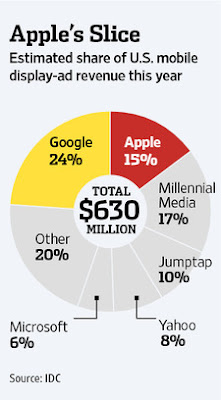 Last year, Apple shared the top spot in the mobile display ad market with Google, with each company capturing 19%, according to research firm IDC. This year, Apple fell to the No. 3 spot, behind Google and independent mobile ad firm Millennial Media, capturing 15%, or $95 million, of the $630 million market, IDC says.

Hordes of developers have activated iAd, but they say that Apple hasn't sold enough to make any meaningful revenue for them. David Barnard, founder of mobile app company App Cubby, says he earned $320 from iAd in the past 30 days and that the service is only filling roughly 13% of his apps requests.

As I wrote recently, Apple is not an ad company. In this market they are going to lose to Google  because, among other things, Google has a much better targeting and delivery platform. The ad-based business model fits Google setup like a glove. On the other hand, Steve Jobs always hated ads and as the result, in Apple's kingdom content is the king and ads are an afterthought.

Further, I would venture to say that when (not if) Google and Apple come out with their digital TV products, the overall business outcome will be the same: Apple = content; Google = ads.