Many news outlets, including the Wall Street Journal, wrote recently about Amazon's US Patent 8,615,473, issued on December 24, 2013, titled "Method and system for anticipatory package shipping." For example, Tyler Cowen, of the marginalrevolution.com fame, quoted a catchy 2-liner to describe the invention:


The Seattle retailer in December gained a patent for what it calls “anticipatory shipping,” a method to start delivering packages even before customers click “buy.”

The title of Cowen's blog entry "Back to the Amazon future" tells more about people's hyped-up perception of Amazon's delivery prowess than the actual invention.

That is, the patent is a lot more mundane than journalists and bloggers imagine. It covers a scenario where a particular item can be re-routed to a specific address while it is still being shipped to a general geographical area. 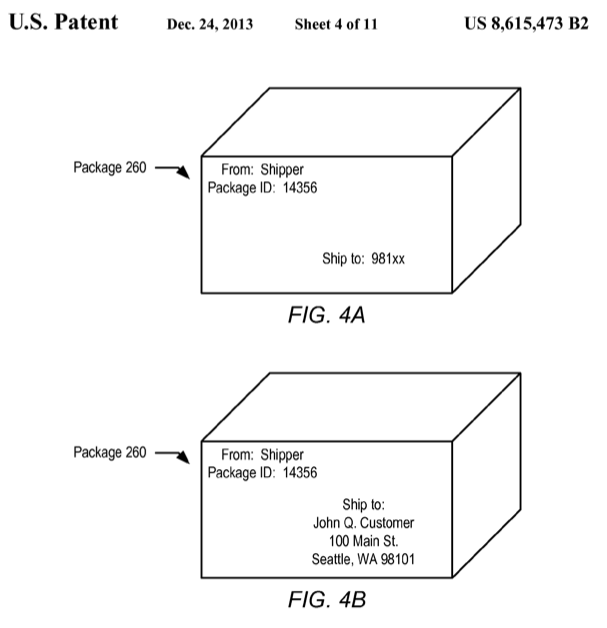 The pre-emptive part of the invention is not new at all. Retailers routinely ship products before people buy the stuff. When you go to a grocery store you buy a watermelon that was pre-emptively shipped to this location for your buying convenience. The same goes for TVs, cameras, flowers, etc. It's obvious that the retailer takes into account what Amazon calls "business variables," e.g. that people buy more flowers before the Valentine's Day, than the Father's Day.

Let's de-glamourize the patent by thinking that we deal with low-tech railroad coal shipments, instead of high-tech Amazon robotic drones. Imagine that the year is 1914 and you are in the coal business. You know seasonal patterns and you anticipate customer orders based, e.g. on the weather. If it's going to be cold in Michigan you know that people will burn more coal to heat their houses. They've done it year after year after year. Being smart, you start shipping coal to Michigan by railroad before you receive specific orders. Then, when you receive the actual orders you send a telegram to the railroad company and ask them to re-route some of the coal cars to Detroit an Ann Arbor, which happen to be close to one of your Michigan coal warehouses. That's it. Only instead of coal cars in 1914, Amazon ships socks and shoes in 2014. Nothing magically pre-emptive here.

Amazon's US Patent 8,615,473 is one of the three the company received so far on various aspects of the same invention.

The patents cover the same basic scenario: ship a package to a general geographic area, then notify the shipping company of a specific address in the area before the final delivery. Most likely, the patents will never be used because Amazon is already a dominant force in the industry.

To me, this particular media event illustrates multiple layers of "aboutness" that people pile up on top of each other when describing a hypothetical object or process. First, Amazon writes a patent application about a proposed modification to a shipping process. Then, the US Patent Office issues office actions that finalize patent claims about the invention and grants a patent. Then, a blogger reads the patent and writes a blog post about it. Then, an economist twits about the blog post. Etc. etc. Once an error creeps into the aboutness process, the entire information trail ends up leading nowhere.