Lab Notebook: How to explain Silicon Valley to a Martian.

Explaining Silicon Valley to humans is quite satisfying but can be very hard. John Kelley and I spend an entire academic quarter on this task and we manage to cover only the basics. Human students differ significantly in their cognitive, motivational, and emotional backgrounds. Some of them are locals, who know a lot about hi-tech businesses; some are newcomers, who want to understand better the place they happen to be visiting. Some are interested in personal stories of inventors and entrepreneurs; some are eager to learn the core principles behind SV-style innovations. The list of student interests and motivations could go on and on, but inevitably, our explanations of how Silicon Valley works are subjective.

On the other hand, to a Martian, all human individuals, how they live and do business, look pretty much the same. To explain Silicon Valley to a Martian, we would have to rely on objective truths, not our human emotions and motivations. Therefore, universal mathematical principles would be a logical place to start.

In the 1930s, a human mathematician, Alan Turing, came up with an abstract model for an automatic machine that can execute computational instructions. According to the model, the abstract machine is fed with an infinite tape with symbols on it. The machine can move the tape and manipulate symbols: read, write, or erase them. The state of the machine and its follow-up manipulations depend on its earlier interaction with the symbols. A Universal Turing Machine can simulate any Turing Machine with any symbolic input.

Silicon Valley is a place on Earth, where people know how to make physical machines that can perform operations of a Universal Turing Machine. More importantly, they know how to make such machines run exponentially better over time. That is, humans in Silicon Valley can double computational speed of the machines every 1.5 Earth years. We humans call this technology pattern "The Moore's Law." It held true for the last 50 years, making our computations roughly 1,000,000,000,000,000 faster in the process.

Examples of Machine 1 are: the Integrated Circuit, the magnetic hard drive, the Ethernet, the Internet, the Google Spanner, etc. 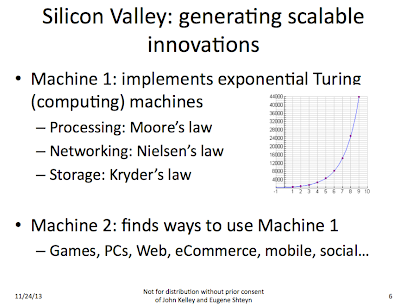 Note that the Machine 1 by itself is meaningless to humans. Although it can shuffle symbols back and forth exponentially faster, somebody needs to figure out how to make this symbol shuffling useful. Fortunately for humans in Silicon Valley, mathematicians back in the 1930s formulated another principle — the Church-Turing thesis. Based on the thesis, we can explain to an ordinary Martian that any computable logic, no matter how long or complicated, can be executed by the Universal Turing Machine, implemented either in hardware or software or both. Therefore, if somebody (let's call him Steve Jobs) comes up with an idea for a logically consistent, useful computing device or application, it is guaranteed to work. Guess what, we say to a curious Martian, smart humans in Silicon Valley figured out a way to regularly come up with useful applications. To simplify our conversation, I will call this ingenuous creative capability "Silicon Valley Machine 2" or "Machine 2."