Lab Notebook: Desalination in Israel (example of Invention vs Innovation)

For the second edition of Scalable Innovation we can use the example of desalination to show the difference between invention and innovation. After a series of droughts, Israeli government went ahead and built multiple desalination plants capable of satisfying up to 80% of the country's water needs. See,


In Israel, desalination provides 300 million cubic meters of water per year – about 40 percent of the country’s total water needs. That number will jump to 450 million when Sorek opens, and will hit nearly 600 million as plants expand in 2014, providing up to 80 percent of Israel’s potable water.


The innovation is based on a 1960s invention by Sidney Loeb and Srinivasa Sourirajan, of UCLA (US Patent 3,133,132. High Flow Porous Membranes for Separating Water from Saline Solutiosn). Unlike previous desalination techniques, the invention is not based on the evaporation/condensation cycle, which makes it energy-efficient and highly scalable. 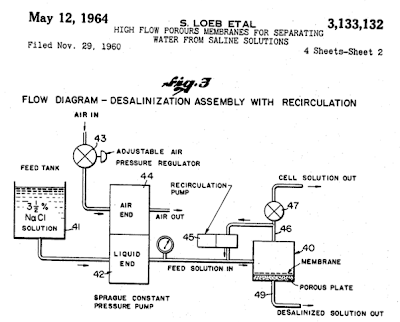 It took the original invention more than 40 years to become a successful innovation. We can project that a combination of wind/solar power and novel desalination techniques will solve the clean water supply problem for many developed and developing countries. For example, with enough political will, California droughts can become a thing of the past. In my opinion, water-related innovations would be more useful to the state than high speed rail and other expensive transportation projects.