Solving the Life vs Glory dilemma - 2

Recap: In my earlier posts I described and analyzed in detail a typical dilemma situation: a person faces mutually exclusive choices. For example, the ancient Greek hero Achilles has to choose between dying young with eternal glory or living a long, uneventful life. The modern hero Neo from the Matrix has to chose between the Red pill and the Blue pill.

In art, heroes choose dilemmas. In real life, we try to get away from them by picking a reasonable trade-off - "the middle way." A fundamental characteristic of a dilemma or trade-off situation is the existence of "The Box." The Box represents a set of constraints, either visible or invisible. The first step to think outside the box is to discover what the box is. 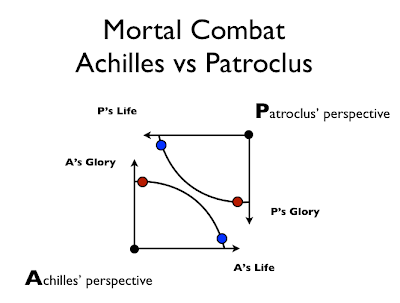 In the Achilles example, we've established that he is locked in the box of personal mortal combat with an opposing fighter - Patroclus. Even if Achilles wins today, sooner or later a new fighter will be born to kill him. That is, once you've entered the dilemma box, the choices are unavoidable: Achilles wins some great battles, but he is eventually killed by Paris, who, in turn, dies in combat later.

At the first glance, the Achilles' Life vs Glory dilemma seems to have no happy outcome. On the other hand, we've established that another Greek Hero - Odysseus - had found a breakthrough solution: he reached eternal glory AND lived a long, fulfilling life. How did he do that?

First, let me say that the Achilles' box is version of a theoretical construct created by economist Francis Ysidro Edgeworth in the 19th century. It serves as a foundational principle for the modern economics of free markets, where people make rational choices about allocation of limited resources. That is why the first principle of economics is often stated as "Everything is a trade-off."

In Sclalable Innovation (Prologue), we show that great innovations often happen when people break trade-offs and dilemmas, instead of strengthening them. Odysseus is no exception. As a creative individual, he sees outside the Achilles' box. In his thinking, a 3-rd dimension exists - gods and other people (fig below). 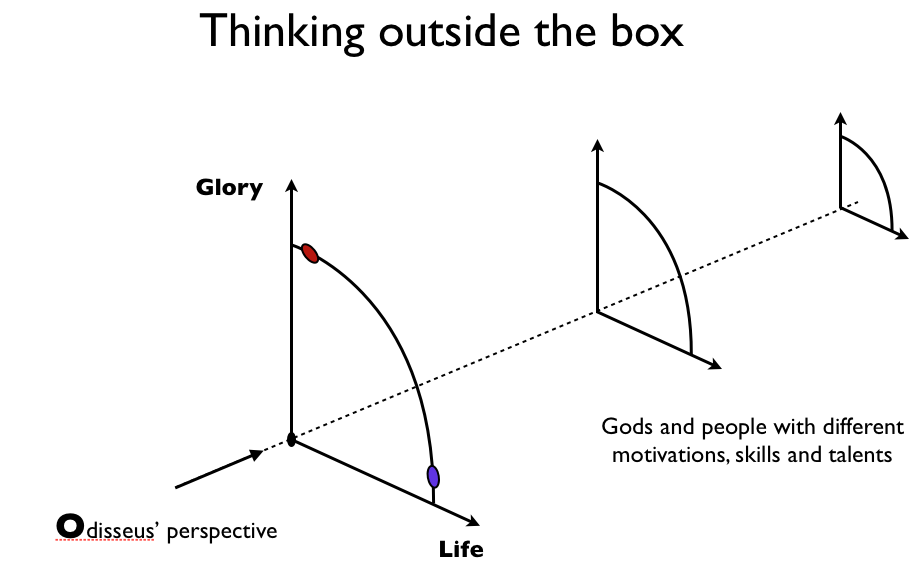 When Odysseus encounters a tough challenge he leverages this dimension to generate a broad variety of coordinated actions. During the siege of Troy, he finally defeats the enemy city by getting one group of Greeks build the Trojan Horse, another group to hide inside it, yet another to rush the city when the Horse is inside, etc. This pattern of problem solving repeats when Odysseus runs into trouble on his way back home to Ithaca. For example, he uses the help of his team to defeat the Cyclops and escape from the cave. (Even the Cyclops' sheep act as "members" his team.) Odysseus accomplishes the impossible feat of listening to the song of the Sirens and surviving it too. (I posted about his solution in detail in 2011). Odysseus returns home to Ithaca and restores himself as the rightful king, by craftily creating a coalition of players and arranging the circumstances to benefit his cause. As the result of his adventures, Odysseus achieves eternal glory AND ensures that he has a long life.

In short, Odysseus is a 3D strategist, while Achilles is a 2D tactician. Achilles thinks inside the box, while Odysseus thinks outside it, by discovering dimensions of the situation that Achilles cannot see. In these dimensions, he finds opportunities for novel actions and their novel combinations. To motivate his allies, he uses certain psychological effects, which I'm going to cover later.