Nortel/Rockstar US Patent 6,378,069 - a ticking bomb for the smartphone industry?

In July 2011, a group of companies led by Apple, Microsoft, RIM and others bought 6,000 Nortel patents. The patents were assigned to a holding entity Rockstar Consortium, Inc. One of the patents in the portfolio is US 6,378,069 "Apparatus and methods for providing software updates to devices in a communication network," issued April 23, 2002. I ran into it while reviewing references for the newly issued Facebook patent US 8,631,239.

The original Nortel patent looks incredibly broad. Its claim 1 covers any system that has a database of subscriber records and can provide software updates to the subscribers. 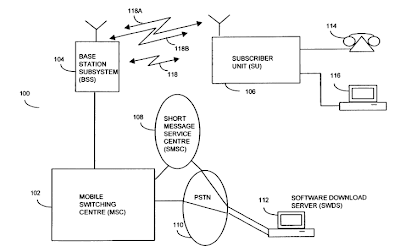 Arguably, the patent covers software update systems for smartphones, PCs, tablets, ebook readers (hello, Amazon!), and everything on the Internet that requires a software update. One could try to circumvent the patent by delegating software distribution to third parties, i.e. decoupling the entity that holds the subscriber database and the one that actually communicates to the destination device. It's not clear how this solution could play out in courts. Litigation over this potential workaround would be an interesting case to watch.

Rockstar has not asserted the patent yet, but the consortium still has several years to do that. They've already sued Google for allegedly infringing Nortel patents on relevant advertisement. Most likely, the Nortel portfolio contains more patent gems; litigating them can prove extremely expensive. The industry would be wise to set up a standard-like body to figure out reasonable licensing terms, instead of engaging in a series of all-out patent wars.

From our system model point of view, the patent covers key Control Points (see Scalable Innovation, Chapter 5, System Control Points: Where To Aim Your Silver Bullets), i.e. using Aboutness to direct a Packaged Payload - this is as basic as it can possibly be. An equivalent broad patent for Facebook would cover using information about users for sending messages, including ads. For Netflix, it would be using subscriber database for sending recommendations, etc. Powerful, if you can get it issued.