Solving the Life vs Glory dilemma - 1

In my earlier post, I quoted Achilles' dilemma from the Iliad. He has a difficult choice between 1) a short, but glorious life of a mortal combat hero; and 2) long, but uneventful life of a provincial king. I also noted a similar choice that Neo, the main character of the Matrix, faces in the virtual world of the all-powerful Mr. Smith(s). Morpheus, another rebel hero, offers him the choice between the Blue and Red pills. Neo chooses the Red pill, which leads him to a dangerous fight with the intelligent machines that rule his world.

Here's how we can diagram the dilemma. The horizontal axis is length of Life; the vertical - Glory. The curvy line is a typical trade-off trajectory, which can take extreme positions: Red = Eternal Glory and Early Death; Blue = Long Life and No Glory. 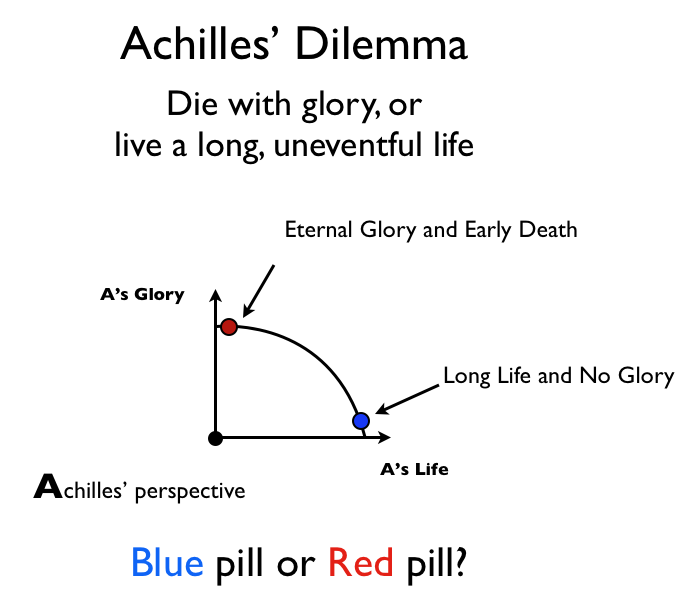 After posting the dilemma, I went on our regular evening dog walk with Dolce, the Giant Schnauzer. As we were walking, I started to think about Achilles' choices. Neither one of them felt really attractive. Nevertheless, I was sure that the dilemma must have a solution. That is, solving trade-offs and dilemmas is the bread and butter of the TRIZ methodology, which I studied back in college and still practice in my invention work. 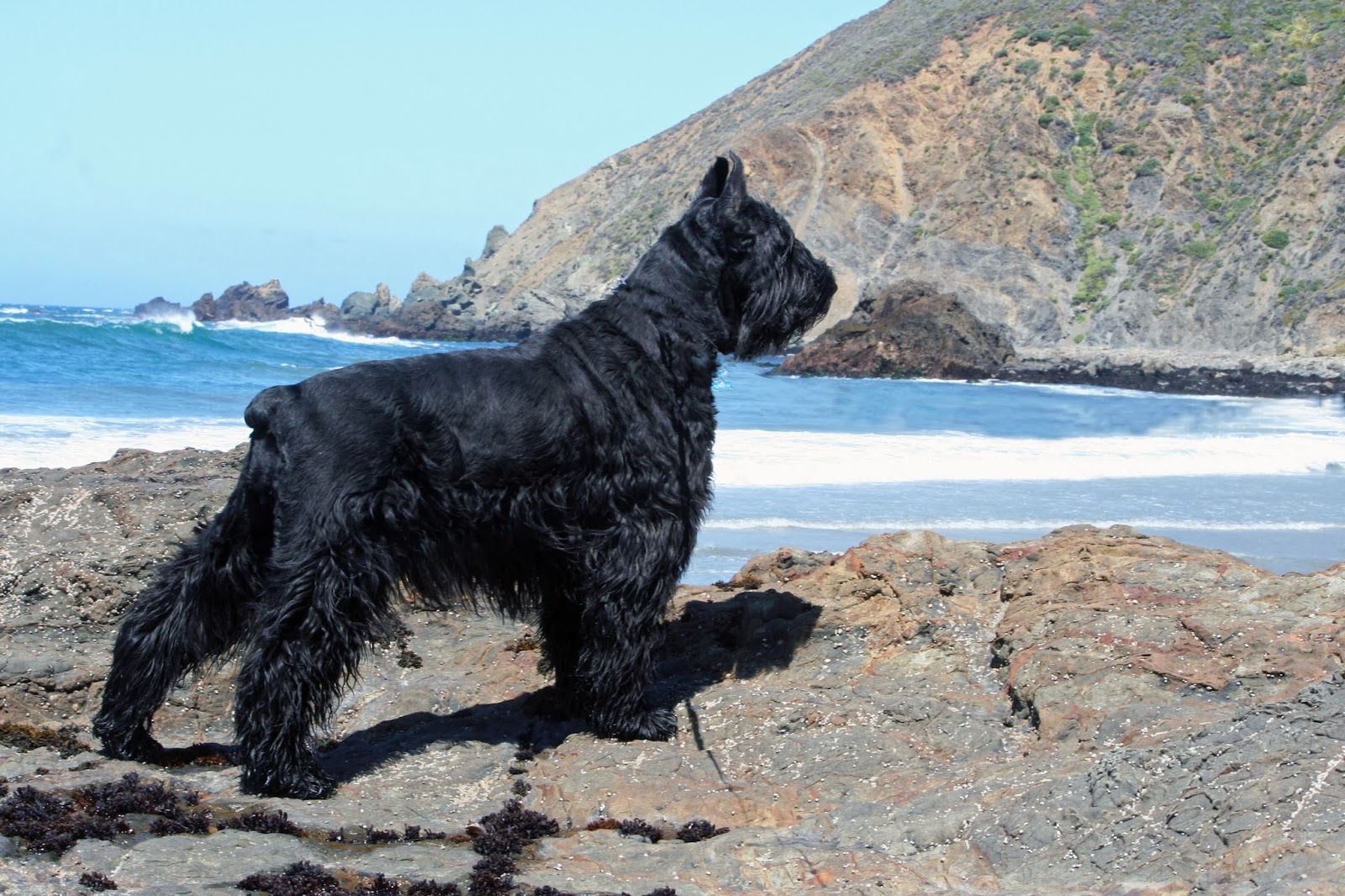 The key principle we need to apply here is "Think Slowly!" That is, instead of making a quick choice based on intuition, we have to carefully consider the problem situation. Luckily, a dog walk is perfect for unhurried thinking.

The first step is to get rid of simple, meaningless labels.  For example, the phrase "Blue pill or Red pill" makes the choices easy to perceive in movies, but it tells us nothing about the nature of the situation. The contrasting colors can describe a conflict between all kinds of situations: from chess, to sports teams, to countries, etc. Since we don't know the relevance of colors, when offered the Blue or Red pill, we should say "Neither" and think hard.

How to think about dilemmas? Usually, a trade-off or dilemma is a sign of a constraint that we take for granted. It acts as a box that limits our choices. To solve the dilemma, we have to think outside the box. But how? First, let's try to identify the Achilles' box. 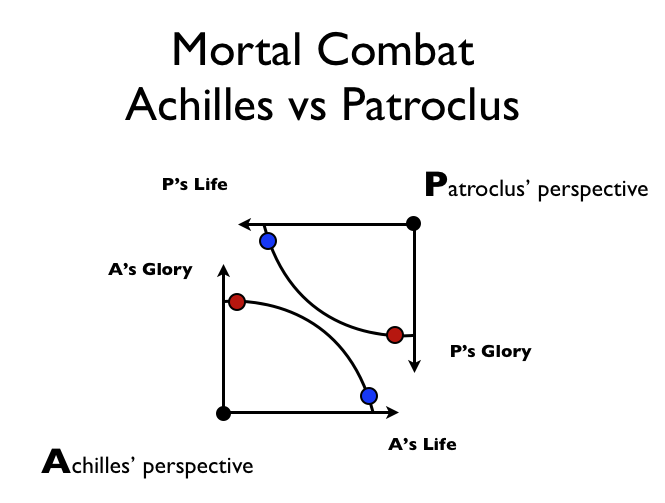 To find the box, we need to see the situation from a different perspective. We know that Achilles is the ultimate mortal combat fighter. He achieves his eternal glory by fighting other heroes to death. In the Iliad, he challenges a famous Trojan warrior - Patroclus. Therefore, we need to add a Patroclus' perspective to the picture (above). Now, we can see the box! Achilles and Patroclus are locked in mortal combat. If one lives, another dies. 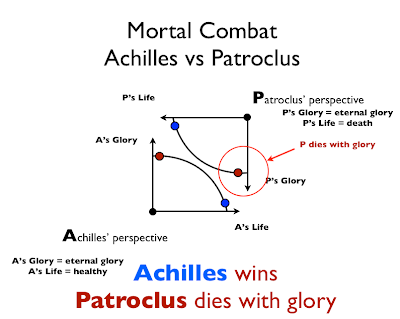 In the Iliad, Achilles kills his adversary (the red circle in the figure above). Patroclus dies, but he achieves the eternal glory because he fights valiantly. In the mortal combat dilemma, he gets the Red pill. Although the Patroclus situation is clear, Achilles appears to escape his predicament. He gets the best of both worlds: 1) eternal glory for killing the best Trojan hero; 2) long life after the combat. Achilles lives with glory! 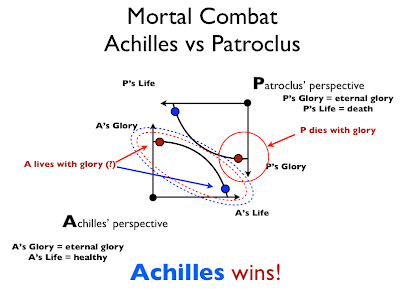 Unfortunately, the career of a mortal combat fighter doesn't end at the last fight he wins. On the contrary, it ends when he eventually looses to the next great hero. In the Iliad, Paris (the guy who stole Helen from the Greeks) shoots and kills Achilles with an arrow. Remarkably, the arrow hits Achilles in the heel, the only unprotected part of his body (thus, the expression the Achilles' Heel). 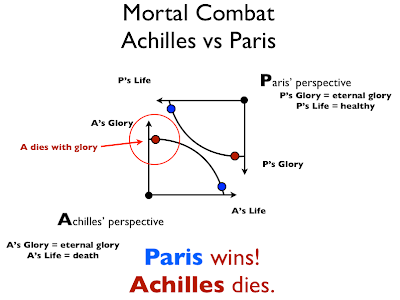 As the result, the original prophesy is fulfilled: Achilles dies and earns eternal glory (the red circle in the figure above). Given the mortal combat box, it's easy to predict the fate of Paris too.
The Achilles dilemma strikes again: Paris dies in combat, earning for himself eternal glory and, in the process, causing the eventual destruction of Troy.

By the time Dolce and I are halfway through our walk, the original dilemma looks totally unsolvable. Nevertheless, as we continue our problem analysis, we recognize that our favorite hero Odysseus, "the man of twists and turns," manages to escape the fate of Achilles and other mortal combat heroes. That is, he earns eternal glory and lives a long, fulfilled life. Moreover, his method of problem-solving is consistent throughout the Iliad and Odyssey. In each dilemma, he finds a way to think outside the box. How? I'll try to cover his method of problem solving tomorrow. Now, it's time for a dog walk.