Facebook gets a patent on the "What's his face?" feature.

Facebook's US Patent 8,631,084, issued on January 14, 2014, covers (among other things) a user scenario where you can send one's picture or a video clip from your smartphone to a server and receive a list of people in your social network who are likely to be in the vicinity. You can also tag the picture with the name from the list.

I like the idea. If Facebook donated the patent to a privacy watchdog, unauthorized snoopers, including NSA, can be sued for patent infringement. The patent would probably cover similar Google Glass applications. 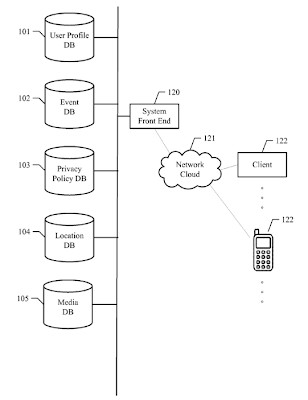 From the system point of view, the patent covers the process of matching different types of aboutness to an object. That is, textual contact information about a person (name, etc.) is complemented by a photo/video. Essentially, we create an aboutness management system, where the right item can be selected based on the context of object use/interaction. The application provides the context for the matching process. In this case, it's social networking, which is "hardwired" into the patent. I would try to push the concept into other contexts, industrial, commercial, navigational (GPS), medical, office, the internet of things, AI, etc.