There's an ongoing debate about the causes of the slowdown in productivity of American workers, beginning some time around mid 1970-s. The chart below shows trend vs actual productivity since the post-WW|| recession. (the chart below is from an MIT Tech Review article - click to read.) 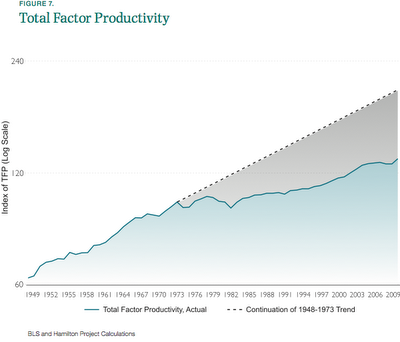 The IT productivity paradox is often cited as one of the major reasons.

Recently, economist Tyler Cowen wrote a book on this topic - The Great Stagnation, which I'm in the process of reading. In the meantime, it's important to note that heavy IT investment does not create a lot of jobs. Here's how Apple's new datacenter looks like from a job creation perspective:

A trillion-dollar question would be, What kind of innovation creates local jobs? For some reason, I have this vague association between our times and the times of the 18th century agricultural revolution in England. On one hand, the revolution produced a breakthrough in food production; on the other, it displaced hundreds of thousands of peasants [and their children] who had to move to the cities in search of work. Where would all the displaced factory workers go now? Social networking?