Invention of the Day: Electronic Music.

In 1920, a Russian inventor, Professor Léon Theremin created an electric device that could be played without touching. In 1928, he received a patent for his invention and licensed it to RCA. The device started a technology revolution that eventually brought about electric guitars, organs, and even violins. 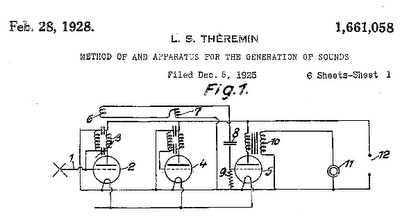 1. A tone generating system controlled by the hand and comprising an electrical circuit embodying an oscillation generator, 'means in said circuit including a conductor having a field which when influenced by a hand moving therein will vary the resonant frequency of said circuit according to the movement of said hand only, and a sound reproducer connected with said circuit for emitting tones according to the electrical variations occurring in the circuit.


The video below shows how you can play the device (simply amazing!)