Invention of the Day: Pantaloons with rivets.

The famous Levi's jeans many of us wear today were invented by Jacob W. Davis of Reno, Nevada, in 1872. The inventor assigned his patent, US 139,121, and went into partnership with Levi Strauss of San Francisco who did good business supplying West Coast miners and workers. The whole patent was a two-pager: one page for the drawing, another for the description. 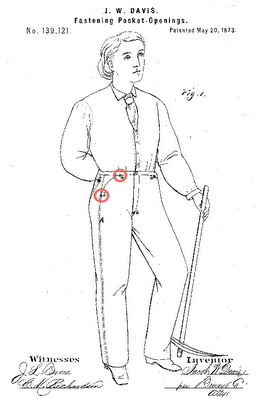 the consequent pressure or strain upon them.

To strengthen this part I employ a rivet, eyelet, or other equivalent metal stud, &, which I pass through a hole at the end of the seam, so as to bind the two parts of cloth together, and then head it down upon both sides so as to firmly unite the two parts. When rivets which already have one head are used, it is only necessary to head the opposite end, and a washer can be interposed, if desired, in the usual way. By this means I avoid a large amount of trouble in mending portions of seams which are subjected to constant strain.

Having thus described my invention, what I claim as new, and desire to secure by Letters Patent, is—As a new article of manufacture, a pair of pantaloons having the pocket-openings secured at each edge by means of rivets, substantially hi the manner described and shown, whereby the seams at the points named are prevented from ripping, as set forth.