A good interview with Jeff Bezos in Wired.

The second strategy works because you commoditize all system elements, except Control. Commoditization increases the number and types of elements in the system, therefore the marginal value of Control grows while the marginal value of each individual element sinks. For example, the cost of adding a new book or movie to the system is trivial. Having the ability to find, sell, and deliver the book or the movie among millions of other books and movies is priceless. (See slides from my Model-Based Innovation course.) 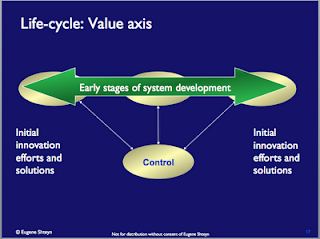 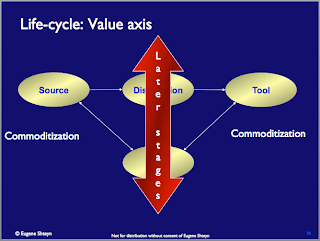 His thinking about the advantage of long-term planning horizon is consistent with the logic of procrastination I mentioned a couple of days earlier.


Bezos: If everything you do needs to work on a three-year time horizon, then you’re competing against a lot of people. But if you’re willing to invest on a seven-year time horizon, you’re now competing against a fraction of those people, because very few companies are willing to do that. Just by lengthening the time horizon, you can engage in endeavors that you could never otherwise pursue. At Amazon we like things to work in five to seven years. We’re willing to plant seeds, let them grow—and we’re very stubborn. We say we’re stubborn on vision and flexible on details.


Being "stubborn on vision" means operating effective commitment devices and aiming high (the upper left quadrant on the diagram.)

P.S. The stuff in the article about competition between iPad and Kindle is nonsense. The two devices belong to two different biz models and don't compete. Post-PC and Post-Web are different parts of the same system (the former is Tool-based, the latter is Source-based). Amazon's real competitor is Google, especially after the Motorola purchase. Both companies are built on commoditization of hardware and scale of cloud services. The best thing going for Amazon now is Google's lack of focus.


Levy: Young startups all tell me that even if Google offers them free hosting, they still want to use Amazon. Why do you think that is?
Bezos: We were determined to build the best services but to price them at a level that customers couldn’t match, even if they were willing to use inferior products. Tech companies always have high margins, except for Amazon. We’re the only tech company with low margins.